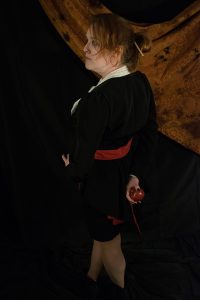 In celebration of Halloween (which is just around the corner! How is it almost November already?) — I put together another outfit inspired by a favorite game of mine that also happens to be a psychological horror game! It’s called Layers of Fear. While my first outfit was inspired by a character, the inspiration for this one was sort of pulled from the game in general. Also like the last outfit, I got to cheat and use a jacket I had for a cosplay from the game — I made this jacket though! So it’s a little different than the last one. 😀

I stuck with black and red mostly, with a cream-colored shirt to break it all up and I couldn’t help adding the paintbrush. And the apple, because you know… they’re running out of them apparently. Another note: black nail polish (any really dark color actually) really sucks to take off. I’m sure that’s already known by the world but I needed to reiterate.

And I couldn’t resist the necklace that only comes out when the jacket is off. I’ve had it for so long and have never really worn it because I haven’t had an ~excuse~ …I’ll be wearing it more often now.

(Did I almost make a piece of jewelry with a fake eyeball for this outfit? Maybe. (¬‿¬)) 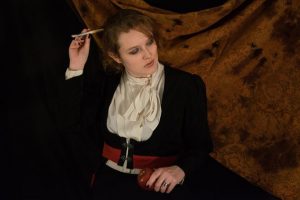 Abandonworn is a feature that has traveled from blog to blog over the years, taking on a few different names before settling here at Neon Shores. The feature contains photos of outfits I’ve put together that are inspired by a video game, a video game character, or some other aspect of a video game! Sometimes they can be inspired by different types of games too, so keep an eye out! ;D