Nate and I get a lot of questions about these costumes, especially around Halloween so I thought I’d edit this older blog post from our old Zhobot blog with more info on the process and bump the date up to now so it can easily be found by anyone who might want to be Barbie & Ken for Halloween this year! October is coming up fast! 🙂 Photos on this post that aren’t progress shots are many thanks to the lovely Katsuya Weller! <3 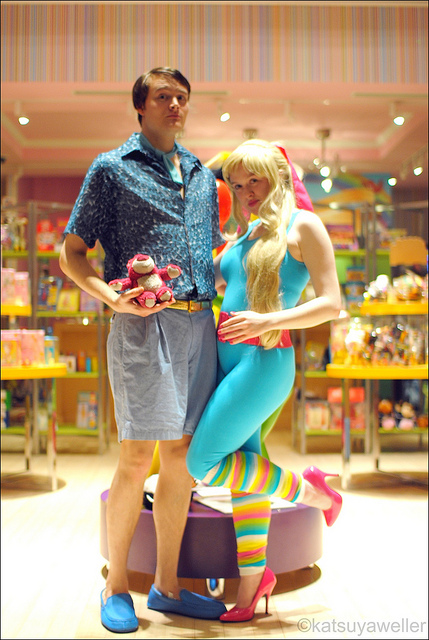 For Halloween 2010 & Katsucon 2011, we had the awesome opportunity to make and wear Barbie and Ken costumes from 2010’s Toy Story 3. We had the idea after the second time we saw the movie in theaters, but didn’t think we would be able to pull it off. Once October 2010 rolled around, we decided we’d go for it and started to get things to work on to try to get the outfits all put together. Here are some of the behind-the-scenes things in case anyone is thinking about making their own Barbie and/or Ken costumes!

The first thing we focused on were the main parts of the outfits – I ordered a turquoise bodysuit from River’s Edge Dancewear and found a pink belt on ebay. 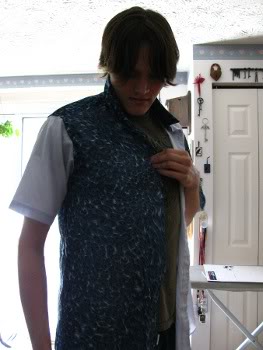 Nate’s outfit was proving to be a tiny bit more difficult. We found a pair of blue shorts at the thrift store and a very flashy gold belt on ebay, but we knew a blue leopard-print shirt wouldn’t be as simple to just stumble across. We already knew that we would have to make one. We had a pattern for the shirt but the only leopard-print fabric we could find (after scouring the internet and a couple stores) was either faux fur or a very floaty see-through silk. The fur just wouldn’t look right (and was way too thick) and the silk wouldn’t work right for the pattern we had for the shirt (and was also a little darker blue than what we needed). We bought the silk, thinking that it could possibly be fudged, then realized what we could do. We took a light blue, short-sleeved button-up shirt and basically attached pieces of the blue leopard-print fabric around/over the shirt. We had six pieces to attach – the collar, the two sleeves, the two pieces on the front and the piece on the back. The pieces on the front covered the buttons/button holes, but we figured it didn’t matter since Ken clothes never have real buttons anyways (it’s usually the plastic snaps or velcro – which is what we used to keep his shirt shut). XD 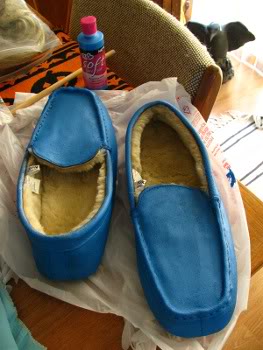 Barbie’s shoes were simple – I ordered a cheap pair of hot pink heels (that are a bit painful to walk in!). Nate had to find blue slip-on shoes. That was easier said than done. He ended up getting a pair of slippers and painting them with blue fabric paint. The best part is that they have fake fur inside so they were very comfortable and warm, especially when it was a little chilly on Halloween.

I was aiming to make a pair of legwarmers that looked like hers with a pair of plain white ones and three colors of bias tape, and they looked good while they were in the process of being made but the white ones I had were weak and didn’t hold shape very well so they stretched and sort of stayed that way, so at the last minute I ended up using a regular pair of legwarmers with colors that matched well enough (there were a couple extra colors in the ones I used). The best part though is that they looked really good and instead of hunting for more later, I’ll probably just stick with the ones I used on Halloween. I love when stuff like that happens.

As for hair, I looked through a bunch of wig sites and on Ebay. I found a specific “Barbie” wig that was in a ponytail and sort of a dark blonde. But the ponytail was a little lopsided and it was super expensive. I ended up finding a lighter blonde wig on ebay with a detachable ponytail that was $30 cheaper! I ordered that 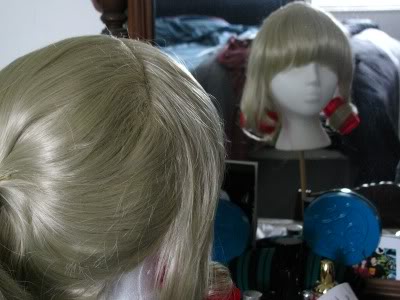 one and cut the bangs past my eyes. I was going to cut off the little curls on the side too, but I ended up liking them too much and they helped cover up my own hair by my ears – my hair is really frizzy and always a pain to keep under wigs.

I sewed the pink sash that goes in her hair (and sewed Nate his ascot, haha!) and the makeup was simple eyeliner, pink eyeshadow and pink lipstick. Hot pink nails too, of course. >D

For his hair, we fiddled around with the idea of making a plastic headpiece, but figured if we just used a product that could make his hair rock hard then it would work just as well. Then he wouldn’t get “hat head”/sweat profusely in a plastic hair piece. We used lots of hairspray (still not enough!) and used a little bit of hairspray color to make his hair more of a reddish-blonde.

We loved the costumes so much after wearing them on Halloween that we decided to bring them to Katsucon in February (along with our mini-Lotso!)~ The con wasn’t too far from us and we were familiar with the location, meaning I wouldn’t have to wander around in those crazy shoes trying to get to con-space! Those things hurt like a mofo – it wasn’t even the height, but the pointy toes. -_- 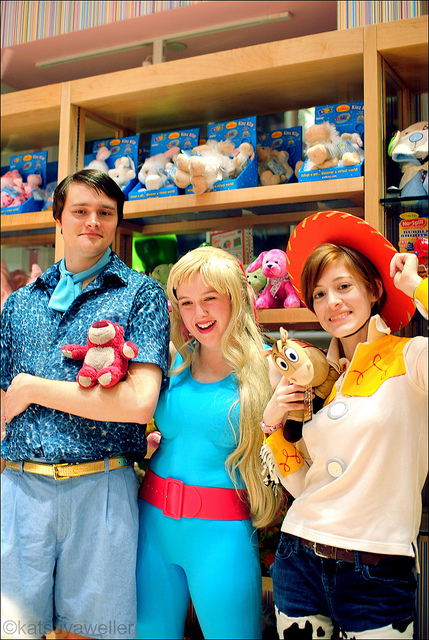 This has to be the most colorful costume we’ve worn and the most bubbly characters we’ve dressed up as! 😉 Nate was lucky with his super comfortable slippers. The inside was toasty warm and had some support. He also got to hold little Lotso, which we (and everyone around us) snorted all night cause he smelled like strawberries.

A couple of years later I got a second wig because the first one was kind of heavy. Besides that, these costumes have been worn a few times and every time we have a blast in them!