I haven’t had the time (or budget, hahah IT’S BEEN $60 FOR SO LONG) to play Danganronpa 3 yet but I told myself I was going to play the first two again before touching the third. I got the PS4 versions of the first two games this past Christmas, so I’m prepping to go through them again (possibly on the stream?) and I’m really excited. The characters, story, and style of the series are all stellar and pull you in very easily.

And of course, one of the main A+ parts of this series (besides the fabulous hot pink blood) is the main villain + mascot, Monokuma — a stuffed(?) bear with black fur on one side, white fur on the other and a sassy streak miles long… also bear puns for days.

I figured it was time to put together an outfit for this little punk, especially since I’ve been wearing this cardigan a ton

lately. It’s one of my favorites (I have a hoodie/pullover/cardigan problem so this is one of Too Damn Many) because it matches everything, isn’t too heavy OR too light, and has everyone’s favorite jerky-ass bear on the back. It also has a really nice embroidered patch on the front of the Hope’s Peak Academy crest on it.

The nails were something I had to do because I’m a dork and this is me we’re talking about. I’ve always liked using multiple colors on my nails and having the nails of one hand painted white while the nails of the other were painted black (with a couple painted the color red, for Monokuma’s red eye) felt pretty obvious and straight-forward, but I liked the way it turned out. 😉 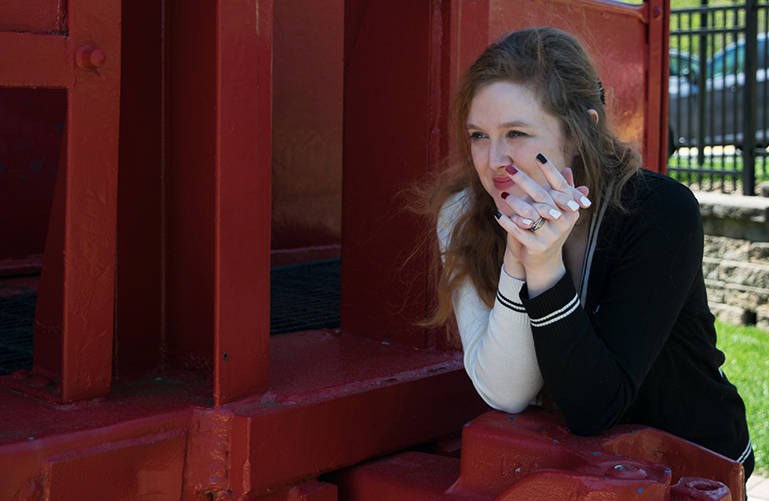 The wind was damn crazy the day Nate snapped these photos (thank you, Nate! :D), so a lot of my hair was flying every which way, but I had some of it held back with a Monokuma-inspired Perler bead bow that I made a few years back. It matches the half and half style and even has a few red beads in the shape of Monokuma’s eye. It can be found in Equipped Inventory’s shop if anyone was interested in picking one up for your own bear-y stylish self! SORRY I HAD TO W/ THE BEAR PUN. D: 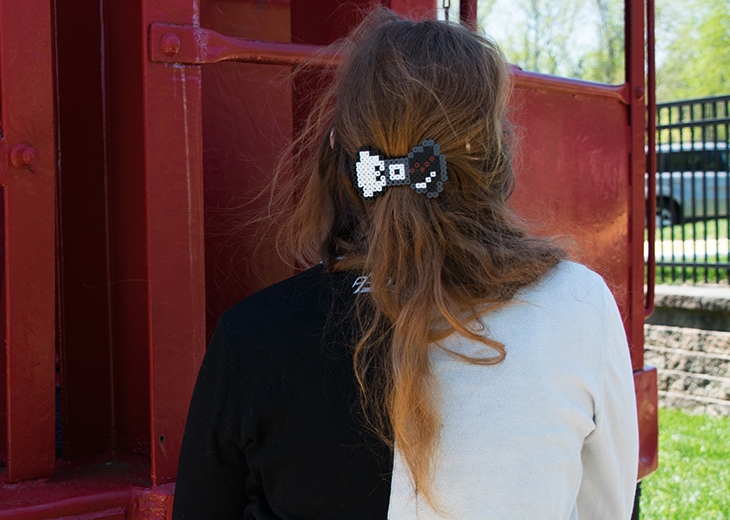 Since it’s (finally) getting warmer here, more Spring/Summer video-game inspired outfits are on the way!