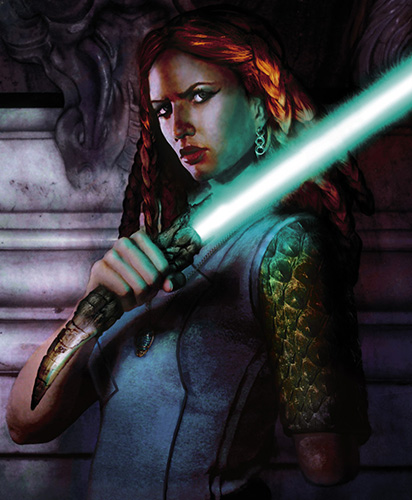 When I start talking with other people about Star Wars, the inevitable “So who is your favorite character?” question comes up. I always have that split second of hesitation. Do I go with a movie character – the one everyone would know (Han Solo)? Or do I go straight to my favorite character in the Star Wars Universe? I always go with the latter. I usually get, “Who is that?” Because not all Star Wars fans know who Tenel Ka Djo is. It’s definitely understandable. I know many people have not read the books or waded into the Expanded Universe (and it’ll be even rarer to find EU fans now since the books/etc. are part of the Legends series) and that’s fine because then I get to describe Tenel Ka to them and why I love her so much.

When I first picked up the Young Jedi Knight books so many years ago, I was instantly drawn to the Solo twins. I wanted to go to the academy and hang out with them. I had even stronger feelings towards Tenel Ka. I didn’t just want to chill with her. I wanted to be her. She was such a strong character to begin with and got even stronger after the accident when she lost her arm. The fact that she refused a replacement as a teenager and grew up to be a Jedi and a Queen Mother – as well a mother to Allana – without ever having a replacement is something I’ve always admired. She blamed herself for the accident and always kept that reminder with her. 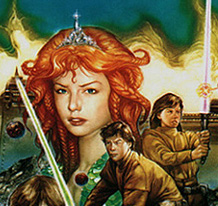 She has always been a self-sufficient character and willing to go to great lengths for her friends. Straying from her beliefs though was something that she didn’t dabble with – like when Darth Caedus wasn’t willing to surrender himself, she threatened to open fire on one of her closest friends from childhood who was her lover and the father to her child because he had turned to the Dark Side. Tenel Ka was also thrust into a position of power that she never wanted, handling it with grace and dynamism, even through her meddling grandmother’s tricks and the murder of her mother (by her grandmother) and later her father (by Darth Caedus, whom her father actually liked when he was Jacen Solo – good going, Jacen. You could’ve had it all).

Tenel Ka always hides her emotions well and that’s something I’ve tended to do since I was younger, which is another reason I’ve always been drawn to her. It was nice to see a character – especially a “good guy” – who wasn’t so outgoing and jolly and friendly right off the bat but also wasn’t stand-offish and rude 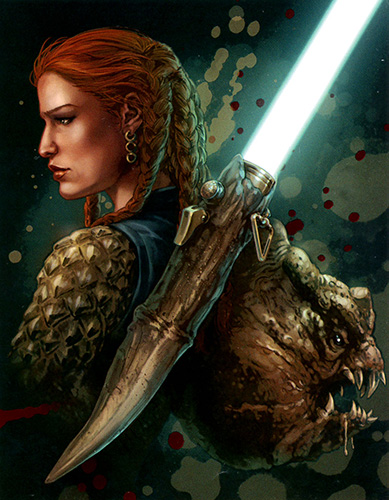 at first (who has a “heart of gold” and “comes around” later). She was just careful, collected, observant – always aware of her surroundings. I loved that she was a completely aloof character at times (most of the time, ha). I also loved that like Jaina, she was practical. She didn’t like to get all fancy with anything and she liked to get her hands dirty. She embraced her Dathomirian heritage and almost seemed to roll her eyes at her Hapan heritage.

Plus, it was really just plain awesome when she kicked Tamith Kai in the kneecap. Not to mention she has one of the coolest lightsabers (a hilt made from a rancor tooth) in the whole galaxy.

It’s really hard for me to put into words why Tenel Ka my favorite character. As you can see by this jumble of rambles there are many reasons. I was talking to Jesse, a friend of mine, about her — specifically about the accident with Jacen and her arm and she had this to say:

“Tenel Ka feels like she is just as strong a warrior and leader without it. It is a constant reminder to be humble about her abilities and to also rely on friends and not just yourself. And a strong symbol of her love and forgiveness for Jacen.” 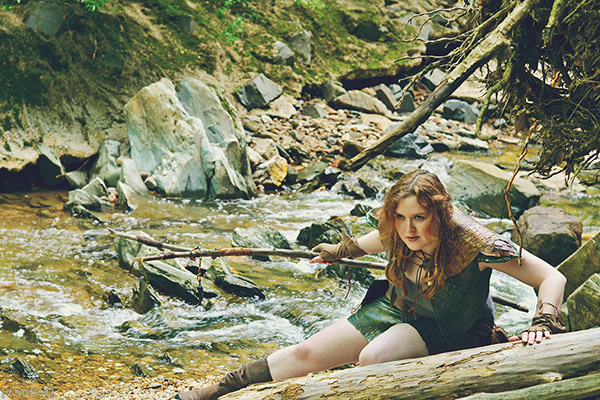 That right there pretty much sums up a lot of why I love Tenel Ka Djo. Her character arc, from secretly being a princess to becoming a Jedi to taking over the role of Queen Mother of Hapes to having a daughter, has been my favorite in the Star Wars universe. This is why you’ll see me costuming as her whenever I 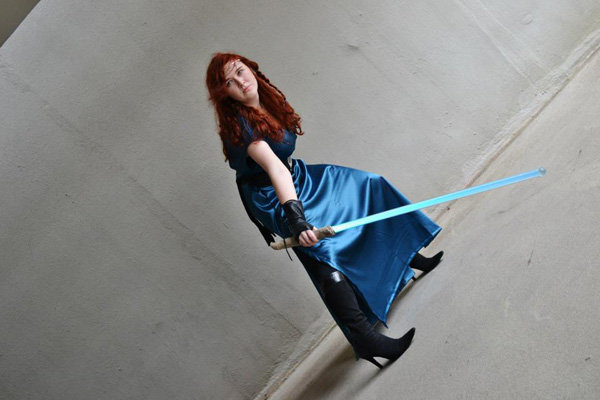 get the chance. Her range of possible outfits include her lizard-hide armor all the way across the spectrum to her royal garb and it’s always fun to mash up the two and try to figure out what an interesting character such as herself would wear – especially with the fact that she’s both a warrior and a queen at heart.

Happy Birthday to The Glitterati!