Sometimes there are things I feel the need to write about; things I love that don’t fit anywhere. Therefore, I have added this tag/category to the assorted list of crazy here: Special Place in My Heart. Because some things video game-related or otherwise just hold special places in my cold, unforgiving tiny heart.

So welcome to the first post of the SPimH tag/category. I needed to talk about my love for waist capes – or buttcapes, asscapes, halfcapes – whatever you want to call them (I usually favor asscapes; IT JUST ROLLS OFF THE TONGUE) so here is the Special Place in my Heart tag and here are the asscapes.

I have always thought regular capes looked really slick, but wow okay, a half cape – a cape that hangs over your lower backside instead of upper where it can possibly restrict your shoulders. You still get the cool, flowing action just in a different place. I DON’T KNOW WHY I LOVE THESE SO MUCH. 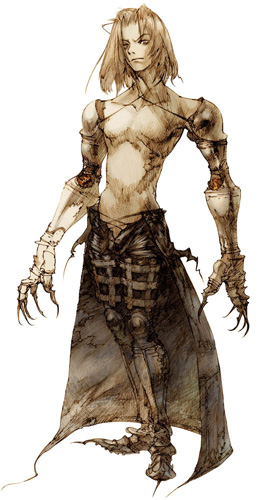 I’m not sure when my love for them began. I feel like it was in 2000 when Vagrant Story came out for the PSX and the main villain, Sydney Losstarot, sported a super-fab waist cape. That was the first time the word asscape came about in our house. I was looking at him in the game and saying, “What would you even call that thing?” My sister almost instantly went, “Asscape?” And we both chuckled like the mature adults we never will be and that word has lived on in my vocabulary since then. 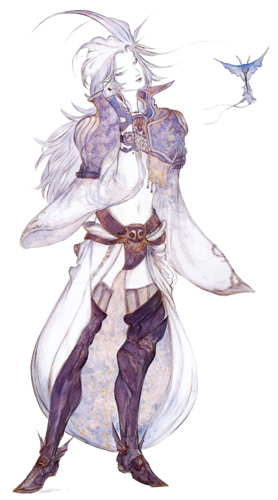 Next up, and during that same year year of the asscape? was Kuja from Final Fantasy IX – SO STYLISH, SO EVIL, SO… FLOWY AND MAGICAL AND ATTACHED TO UNDERGARMENT BITS? I think the asscape with the super tall boots is rad though, so rock it, Kuja. 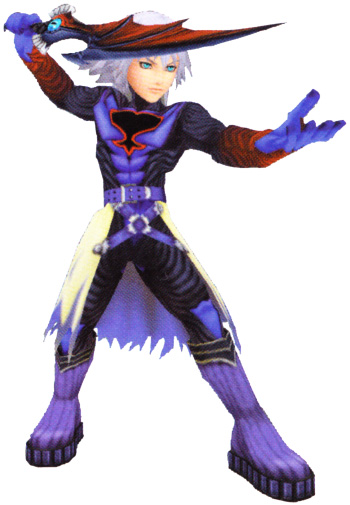 Then I played the first Kingdom hearts game in 2002 and gasp– do I spy another asscape? Squaresoft/Square Enix (whatever they happened to be way back when, still Squaresoft? It’s been too long) just loved handing me asscapes. It’s like they knew. Riku (while in Heartless/Dark Mode) wore a pretty awesome asscape complete with some belt action. WHO DOESN’T LOVE BELTS not Tetsuya Nomura!

Galerians: ASH came along in 2003 and a favorite Galerian of mine, Nitro, happened to be sporting an asscape. Now, it started higher than some others but still fit the criteria. As long as it didn’t start at the shoulders and covered the region of the backside I loved it. Still can’t pinpoint why. This is also when I noticed that most of these characters that I loved with these draped lower backsides were villains in some form or another. Perhaps having an asscape makes you evil, who knows. Is it the wonderful butt fabric’s fault that Riku went into Dark Mode maybe it is. Fabulous accessory for being evil though. It must be up there with a curly mustache to twirl and amazingly arched eyebrows.

I started subconsciously putting my love for asscapes into costuming. Miss Tenel Ka Chume Ta’ Djo (there’s a mouthful) of the Star Wars: Expanded Universe has been a favorite character of mine since I got into Star Wars (a long time ago in galaxy far– you get the drift) and she only has a few official images of her, most of which are from the shoulders up. So when making costumes and outfits of hers, I got to throw in some of my own ideas to round out the whole outfit. She’s not really a fancy-dress-up type (even while she’s the Queen Mother of a 63-planet consortium) so I brought asscapes in to make it somewhat fancy while still keeping it functional in case she needed to fight. Like a boss and all that. First was the Legacy of the Force: Tempest cover (which I’ve made a couple versions of a waist cape for). Then I ended up bringing a different butt cape – technically one that went on the side! SIDECAPE? – in to a costume I threw together for a younger (two-armed, pre-Lightsabers!) Tenel Ka in a week before Katsucon 2012 (you can see I reused the sleeves from the Tempest cover Tenel Ka – was not gonna sit and scale a whole new set of sleeves together NOPE). 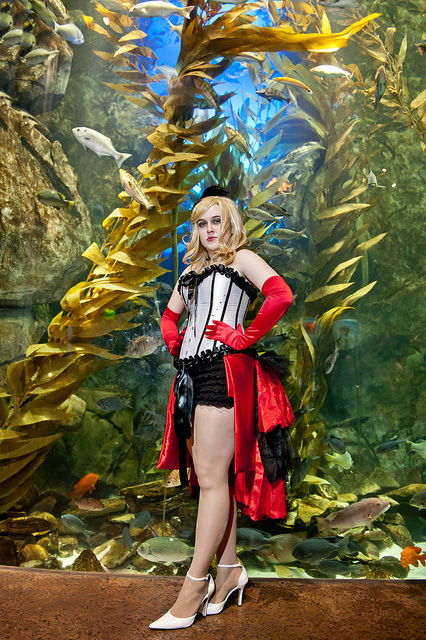 Also with a BioShock costume I made – Jasmine Jolene – I saw another opportunity for a fabric tail. There isn’t much official art of Jasmine so I ended up looking for inspiration from a few pieces of fanart of her and also realized I could buttcape the outfit up SO WHY NOT? I thought it worked with the setting she’s usually in and gave a new dimension to the outfit instead of just being the corset and shorts. 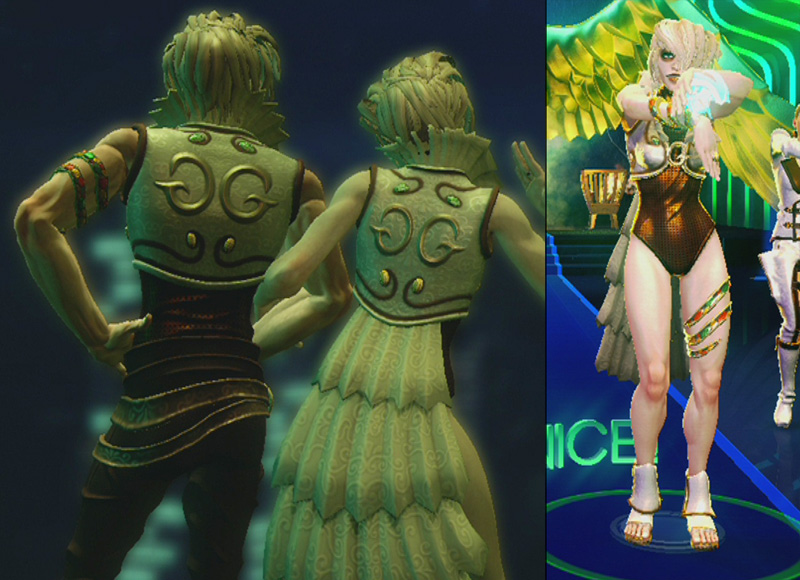 In October of last year, Dance Central 3 came out and it was like the heavens parted and light happened to shine all over my face and someone was singing something somewhere because my favorite Dance Central character, Jaryn, was… wait for it, wearing an A S S C A P E. 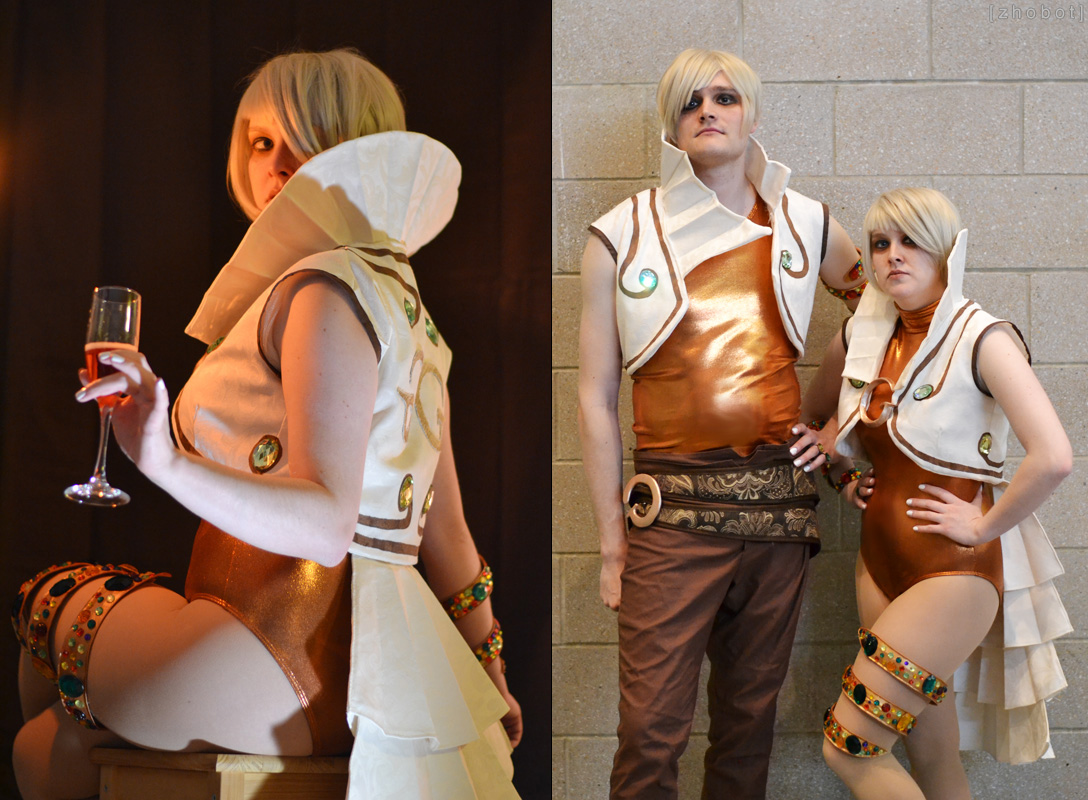 It was a sign! I mean, we knew we were going to costume as the Glitterati in their DC3 outfits (if they were in it, which they are, so YESSSS!) but after I saw the asscape, I knew it was meant to be. It was a pleated asscape too. Extra fabulous.

I’ve been fiddling with making some of my own waist capes (I’ll be proper and use the correct[?] term now, sorry) and have been getting a ton of different ideas for fabrics and patterns and so on, so you might see another post on these in the future! I just had to share this to start because these hold a special place on my backside in my heart.

What characters with butt capes have I missed? Let me know on Twitter (because I know I’m missing some)!

How Fallout 4 Gave Me The Feels