This past weekend Nate and I went to Eastern Shore Fan Con with our friends Bria (of White Hot Room) and Denis (many thanks to them for taking photos at the con like the one in this entry)! ESFC is a con that just turned two years old and will definitely only get bigger – it was a blast! The staff was incredibly sweet as were all the attendees we had the pleasure of talking to and seeing around the con.

We weren’t sure what costumes to bring along with us so we ended up putting together one of the ones that have been on our planned costumes list for a few months now! We added it to our list when we saw Wreck-It Ralph in theaters and with the movie coming out last week on Blu-Ray/DVD (and watching it again, of course!) we thought maybe it was time to finally put together our costumes of George & Meg from Paperman. 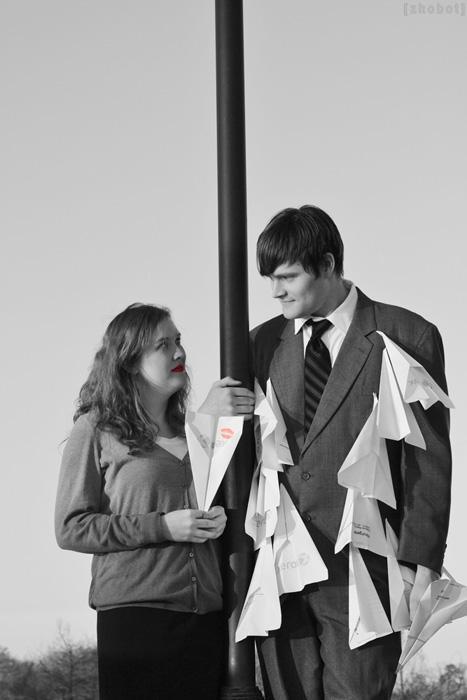 We bought the pieces we didn’t have from the thrift store the Thursday night before the con and Nate folded paper airplanes up the Saturday morning of the con. Denis helped him attach them to the jacket in the car on the way over (thanks, bro! XD). It was a last minute costume (and we will be fixing up a couple of things before bringing these to T-MODE next month since we didn’t have time before this weekend!) but people at the con really seemed to enjoy it (thanks to anyone who did! <3) and we had a lot of fun wearing them! We love Paperman so much and we were both really excited it won the Oscar for best animated short so that made this costume even dearer to our dorky little hearts. 🙂

We’re currently finishing up costumes for PAX East – which isn’t this coming weekend, BUT THE NEXT (fsjkdjfakj where did the time go!) – so we’ll be putting up a costume schedule post for that con soon as well as some costume preview shots (hopefully, haha).